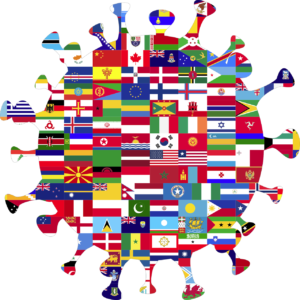 Markets under pressure… and you’re surprised?

I began yesterday’s note saying that it wasn’t just the virus that is causing the most recent round of angst and anxiety in the markets… It is a bunch of things… and by now you are well aware of what they are… The election, the concern over what happens next Wednesday if it’s a statistical tie… or what if Trump pulls it off? Conversely, what happens if Biden pulls out the win? How will both the far left or far right react? And if its contested (which is very likely) how long will it be before we get an answer? One side accusing the vote to be ‘rigged’ while the other side will accuse it of being ‘stolen’… and this will NOT play out well across the country…

Americans are concerned about ‘the reaction’ to the vote vs. the vote itself… and at 60 yrs old – I can’t ever remember a time when THAT was the case.

In addition – we are in the middle of earnings and guess what – stocks were priced to perfection… in fact some stocks were priced BEYOND perfection… trading at ridiculous valuations which so many street analysts explained away as ‘nothing to see here’, the market is strong, the economy is strong blah, blah, blah (never mind that we are in the middle of a pandemic, DC has failed in providing much needed support, major cities still closed to small businesses and the global economy coming under pressure)… so now that we are in the middle of earnings season – guess what? While some companies are ‘beating the estimates’ they are not either giving forward guidance or the guidance is ‘less robust’ than the expectations… And for stocks that have been priced for perfection – this is an issue. Giving the algo’s and asset managers another reason to hit the SELL button.

The highflyers coming under pressure (and that makes sense) while the broader market gets assaulted as the media continues to focus on the rate of infections vs. the rate of ‘recovery’ – because you see – rates of recovery are in the 99% range for the majority of the country… and in the 98% range for the 70 and older crowd. People with health issues or are immune compromised are in a different category – but that is true no matter what – they have health issues and/or are immune compromised – they need to take extra pre-cautions all the time. The virus has only exacerbated that issue for that demographic.

I made note that the Dow broke thru both its 50 & 100 DMA’s while the S&P and Nasdaq pierced their respective 50 DMA’s… and that the path of LEAST resistance was lower… Trendlines that offered support are now levels of resistance and as concerns build – those levels of resistance become more fortified. Expect the indexes to test the lower trendline supports… to see where the bodies lie… will the buyers defend those support levels or will they allow them to break – which will only cause the technically driven algos to ramp it up even more… resulting in more selling pressure… which will then cause the BUYER to pull back… why buy a stock at $50 when you can buy it at $48 only minutes later? Are you following me? And for the media to ask every guest – What they are buying now is exhausting… Asset managers don’t get paid to just buy stocks – They get paid to ‘manage risk’ and by managing that risk – prices may have to go lower… (look what is happening today) just sayin’…

At 7 am – Dow futures are down 440 pts, the S&P’s are off by 45 pts, the Nasdaq is choking – down 120 pts and the Russell is giving up 22 pts. European markets are all off 2.5+%… and the news headlines are all about the virus… as infection rates surge… and countries consider new lockdowns… partial or not – they are lockdowns. Word that hospitals are becoming full are again creating angst – many Drs in the media are suggesting the we are now entering a significant danger zone as summer turns to fall and fall turns to winter… BUT the silver lining is that 2021 will look different… as so many people will have been infected and recovered while therapeutics will continue to provide relief and a vaccine will most likely be available by the late spring/early summer 2021.

And then today – we will get some of the big TECH companies – FB, TWTR and GOOG to appear in DC to argue against changing Section 230 of the Communications Decency Act.

[“Section 230, as passed, has two primary parts both listed under §230(c) as the “Good Samaritan” portion of the law. Section 230(c)(1), defines that an information service provider shall not be treated as a “publisher or speaker” of information from another provider. Section 230(c)(2) provides immunity from civil liabilities for information service providers that remove or restrict content from their services they deem “obscene, lewd, lascivious, filthy, excessively violent, harassing, or otherwise objectionable, whether or not such material is constitutionally protected”, as long as they act “in good faith” in this action.”] Wikipedia

So the issue here is – Can FB or TWTR or GOOG control what we see and hear? Can they arbitrarily delete something that THEY think is objectionable? Who makes that decision? Who controls what we are exposed to and then by default what we THINK? In this moment the issue is – Who controls what is said, Who can say it and Who can see it? Who decides what is ‘disinformation’? It is a tangled web and today’s hearing is one that is sure to be widely watched as section 230 is under the gun… and Zuckerberg, Dorsey and Pinchar try to protect their right to censor what THEY find objectionable…

The S&P closed at 3390 remaining below trendline support at 3407 – which is now trendline resistance… On Monday we traded down to 3364… and this morning it appears as if we will bust right through that as the opening bell rings… S&P’s are down 46 pts… and like I said on Monday if we fail at 3407 then a push to 3300 is next… if we follow the Europeans and decline by 2.5%  today that would take us to 3300!  BINGO – the level I identified on Monday… AND – if we test that and fail… then expect the algo’s to go into full sell mode as the buy side algos retreat… forcing us to test the September lows of 3230-ish… and then THAT is a KEY level to watch as well…

Remember what I said – in addition to the virus conversation – a Biden win and sweep will most likely cause a short-term correction (Is that what the market is REALLY telling us?) before it produces a rally based on what will most likely be a massive fiscal stimulus bill…” I stand by that analysis… this ain’t over just yet… Talk to your advisor to get comfortable with your portfolio. 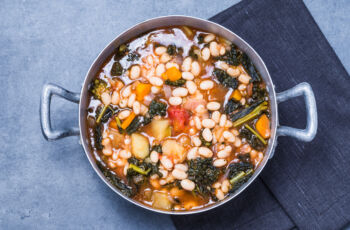 You will need to start with Celery, Carrots, Onions and Red Potatoes…..

Dice the veggies and sauté in a bit of Olive Oil… keep heat on medium and stir frequently. After about 5 – 8 mins – add one can of chicken broth, one can of water, season with pepper – no salt needed… bring to a boil then reduce heat to simmer. Cook for another 10 mins or so… that veggies are nice and tender.

At this point – take 2 or 3 ladles of the veggies and puree in the food processor and return to pot. This gives the soup substance and a hearty texture and flavor.

Next add the Cannelloni beans with the juice from the can along with a baby pasta – you can use: Orzo, Tubettini, Ditalini, or elbows – leave heat on low and cook for about 10 mins… add fresh washed chopped Escarole and stir… continue cooking for another couple of mins and test the pasta for doneness. Should be firm to the bite.

This is a hearty and filling meal – serve in warmed bowls with fresh Italian sliced garlic bread that has been toasted ever so gently in the oven. Enjoy with a bottle of white wine…

* Garlic Bread – for those of you who have never attempted: Melt a stick of butter with crushed/minced garlic and a touch of Olive oil in the microwave. In the meantime, toast slices of Italian “Pane di Casa” in the oven under the broiler. When you flip the bread – Use a pastry brush to brush the butter/garlic mixture onto the slices of bread. Continue to toast and remove when golden brown.