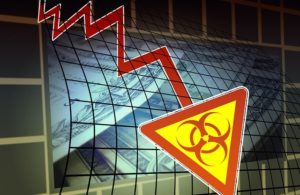 **BREAKING NEWS – 1:00 am EST: POTUS & FLOTUS are both diagnosed with Covid19 – the media is already discussing ‘transfer of power’ (as per the 25th amendment)… Did I miss something? Did POTUS… ? Just so you know – the line of succession – Pence, Pelosi and then Grassley… and then I heard that they (the media) are also talking about the chances of moving Pence to the top of the ticket for the November election… Does anyone else think this is just a bit premature? (Although the latest polls are showing Joey with a 66% chance now of winning the election, so maybe there is another explanation?) Word is that they will quarantine, do contact tracing and then quarantine everyone else. And there are a lot of people to trace… WH staff limited to interaction… WH physicians making hourly updates… Lots of chicken soup, orange juice and rest – we have learned a lot over the past 6 months… therapeutics have improved… more to come – expect this story to steal the day… Factors affecting outcome- age (74 – high risk category), height 6’2”, weight (260? Available on Google), and gender (male) and he is considered overweight… OH -boy – I’m 6’ 235 lbs – Thoughts?

Stocks continued to get whipsawed this week – beginning with the anticipation of the debate and then THE debate (disaster), a contentious political environment and then the expected contested election – toss in the speculation of a second pandemic relief bill that is ‘failing its way through the halls of Congress’ all while we are seeing the rates of infection around the country and the world surging… millions of Americans suffering and millions more are soon to join the list… Disney, Shell, and now the Airlines all slashing jobs because congress can’t do the right thing. When will congress listen to the people they were elected to represent?

Look – the market is grappling with all of the issues we have been discussing with the action being driven by political headlines vs. macro fundamental headlines… The renewed burst of energy that the markets have had this week are a direct result of Treasury Secretary Stevey Mnuchin’s headline on Wednesday that he is trying to come to an agreement with Nancy Pelosi and the Democrats… but that burst of energy began to fade as trading proceeded yesterday… the early morning excitement led to mid-day losses before finally attempting to end higher… by the end of the day – the Dow gained 35 pts, the S&P added 17 pts, the Nasdaq surged ahead by 159 pts and the Russell gained 23 pts.

US futures were down more than 500 pts on the Dow soon after the news hit Twitter – as rampant speculation spread around the world… they have since rallied back a bit – but are setting up for a negative day… at 6:15 am – the Dow is off 450 pts, the S&P off by 58 pts, the Nasdaq is down 260 pts and the Russell is giving up 24 pts… Now if you ask me – I think this is just another swift reaction or a reason to sell the market off – I for one – do not believe that the POTUS is in imminent danger – but I could be wrong… but we won’t really know this for at least another 10 days or so… until then he will remain in quarantine at the WH unable to attend or plan any rallies at all… and this causes us to ask – What does it do to his campaign? Will this change the minds of voters? What about all of those early ballots? Do people get to change their vote? What happens if…? Doctors around the country all weighing in – some raising the level of angst while others appear to be less nervous… Talk of Gilead’s Remdesivir drug being administered will surely send that stock higher along with the other Bio-Techs as talk of a vaccine takes on even more importance…

So as I see it – the political risks will remain the focus… but suddenly I think that the risk of a stimulus deal NOT passing has just plunged – expect to see more serious conversations today as Stevey and Nancy do lunch… and Trump’s campaign? Well clearly, he is now out of circulation for at least 14 days… so… we’ll see. Will this actually fire up his base? Or will he fall further in the polls? Expect lots of data and talk surrounding this very issue.

Now we will get eco data today and today’s NFP (Non-Farm Payroll) report is usually a big event… expectations are for an increase of 875k jobs… but recall that Wednesday’s ADP report was better than expected. The unemployment rate expected to drop to 8.2%, Avg hourly earnings +0.2%, Factory Orders of +0.9%, Durable Goods of +0.4%, and Capital Goods Orders of +1.7%.

Look – in my opinion – the market is pricing in a Biden win – institutions I talk to are all saying the same thing… but I’m not yet convinced that it is pricing in a Democratic sweep… and that is the real KEY… because a Democratic sweep will put – as NY Senator Chucky Schumer tells us – EVERYTHING ON THE TABLE. Statehood (Puerto Rico and DC), increasing the court to 13 vs. 9, taxes, filibuster rule, social programs, a green new deal, etc., etc. If this happens – then I expect the market to reprice immediately… A split congress will allow for the Democrats to control the House and the WH, while the GOP controls the Senate allowing for what our forefathers saw as a system of checks and balances and if this happens then I think the market is ok. But that could all change in 5 weeks…

Expect all sectors to come under pressure today… a move which I think will be short lived… and premature… that’s how I’m playing it – this news has not caused me to change anything other than look for names that will get unduly punished in what appears to be an automated artificial intelligence reaction… Stick to the plan.

The S&P closed at 3380 after testing 3400 yesterday (a level I defined in yesterday’s note)… but that will be a distant memory this morning… futures suggest a lower open of about 50 pts… taking us back to the 3225/3355 range… and while yesterday I said that 3355 would now represent support – this headline will cause the market to blow right through that… but like I said – I think it is temporary… once we get clarity the market will settle down… and resume its ascent… remember – with rates at zero – TINA (there is no alternative) in the long run… if we get substantial talk of a fiscal plan then expect to see buyers come in… talk of the virus will continue to consume the day… as concerns over a chaotic election remain top of mind… And so – I continue to believe that the markets will remain volatile… but I still believe that it can all turn on a dime… Stay tuned… and talk to your advisor if you get anxious… a well-defined plan will do you good.

Join me in wishing both the POTUS and FLOTUS a full and speedy recovery. 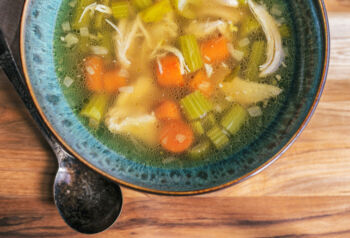 So as your mother always says: “Have some chicken soup – it’s good for you”. This is the way I make it…

Rinse the chicken and remove the innards from the cavity. Rinse the beef shank – place both in the pot and fill with water. Now add the chopped veggies. Season with s&p and bring to a boil. Once it boils – turn the heat to med low and let it simmer for about an 1 1/2 hrs. Turn heat off – remove the meat and allow to cool. (at this point you can add in a can of the beans of your choice if you like. I like Cecci’s)

When cool – remove the skin and debone the chicken. Slice into chunky pieces and return to the soup. Remove the beef from the shank. Now – place the pot in the fridge and allow to cool overnight – the fat from the chicken will rise to the top and form a ‘skin’.

Remove from the fridge and take the fat off and discard. Re-heat and serve alone or with rice or with elbow macaroni. Have plenty of fresh grated Parmegiana cheese.