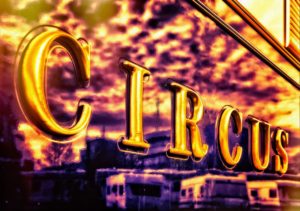 Send in the clowns!!!! It is a big day in DC and expect global investors to be paying close attention…

At Noon, it is must see TV today… The House Antitrust Subcommittee will take center stage and host 4 of the nation’s most successful CEO’s… In a hearing titled:

The point – to question these CEO’s about company practices, clout, size, power and business practices… And how their anti-competitive behavior is impacting their markets. And you can expect that much a lot of attention will be paid to Jeff… Just because he is a ‘lightening rod… Expect them to ask him about how Amazon treated warehouse workers during the height of the pandemic, Wait – aren’t we still in the height of the pandemic? Expect them to ask how they collect and use data and what role AMZN plays in the retailing space… Issues concerning data gathering and data sharing are sure to be top of list for all of these companies…. as they all collect it, sell it, share it, use it and abuse it… Subcommittee Chair Davey Cicilline – makes it clear –

“These platforms have been allowed to run wild and free from really any constraints – the responsibility we have is to make clear what the impacts are of the lack of competition in the digital marketplace.”

On the other side of the argument – expect all 4 of them to argue that they ‘fill a need’ in the marketplace and that they embrace democracy, competition, inclusion and freedom of speech… Bezos sure to argue that he faces competition from online retailers, Pichai will argue that Google has made business large and small more efficient and competitive, Timmy Cook – is going to try and convince congress that Apple ‘does not’ have a dominant market share in any market where they do business! (Now that’s a stretch – even for Timmy – but he’s such a good guy – who cares…) and expect Mark to argue that FB believes in democracy, freedom of speech and inclusion. In the end – this will be widely watched and rightly so– there is a lot going on in the space and this could set the tone for what it is to come – especially if Lizzie or Bernie have anything to say… Remember – they both want to break up big tech… All while everyone of the in congress buys ad time and uses all these platforms to advance their own agenda’s in congress and along the voting trail.  I mean – it’s conflicted – which is why it is going to be so widely watched…

At 2 pm – expect the door to open and FED Chair Jay Powell to step out into the fray and  announce the latest FOMC (Fed Open Market Committee) – news… and for those expecting  another Kool Aid package or an announcement that the FED is now going to start buying equities – I think you will be sorely disappointed…..Look – they have already extended the emergency lending programs thru year end… Expectations are for the FED to continue to remain dovish – march down the path – re-iterate his commitment to the nation and the economy while keeping rates at zero – through 2021… If anyone is expecting Powell to promise lower for longer (meaning into and through 2022) – I would say – be careful… While he may indicate that could be the case – let’s be honest – it’s tough to predict with any real credibility where the economy will be 22 + months out… Remember – we have a presidential election in less than 98 days… so much can and will change in January 2021… that how can anyone possibly predict what FED policy will be in 2022 – Yes, you can hope – but I wouldn’t go changing your whole portfolio now based on what you think he will say at 2 pm. And remember – if inflation rears his/her ugly head – then all bets are off the table… rates will rise and more than likely will rise quickly… (refer to yesterday’s note).

And then there were the earnings… 57 companies reported and 18 missed estimates leaving 39 companies in the plus column – that’s an 82% hit rate… keeping us right in line with this quarter’s performance. Expect more earnings announcements today and even more tomorrow – when we will hear from 63 companies representing 30% of the S&P’s market cap… Incredible really – and the most exciting will be the 3 reports post the close – AAPL, AMZN and FB as they all compete for the spotlight… Expect the afterhours trading in these 3 names to spin out of control.

This morning US futures are essentially flat… as investors around the world wait and wait… Dow futures are +10 pts, the S&P is +  8 pts, the Nasdaq is +66 pts and the Russell is +9 pts. Post the close last night we heard from SBUX – now they swung to a loss BUT they raised forward guidance and this sent the stock up 5% in the afterhours session. AMD beat expectations and raised forward guidance – a double barreled report and this sent the stock up 9% in extended trading… in addition to all the news items listed – we still have congress fighting over the latest stimulus package – and the extension or not of the additional $600 benefit to unemployment that is due to run out on Friday.

Stocks in most of Asia were mixed as well while Chinese stocks advanced hard… rising 2.4% – Australia’s CPI fell by 1.9% sending that index down by 0.25%.  In Japan the Nikkei fell by 1.15%  as earnings disappointed… Nissan for one forecast a 470 billion YEN loss (or $4.4 billion US)  for 2020 – and this cast a negative tone over the broader market   Hong Kong rose 0.45% even after CEO Carrie Lam warned that ‘the city faces an outbreak that could lead to a collapse of its hospital system’

Oil is trading at $41.36 – weekly inventory data from the API (American Petroleum Institute) showed a surprise drop of 6.8 million barrels vs. the expected increase of 357k barrels… And what does this say????? Demand is fine – and while virus cases rise – the demand for energy is not collapsing by any stretch… Later today we will get more inventory data from the EIA (Energy Info Administration) – What will that show?  We remain in the $35/$45 range…

Gold – continues to advance – rising $7 this morning to $1,971/oz… as the safe haven trade is alive and well… Gold continues to be worried about inflation, a dovish FED statement today and the weaker dollar – the dollar index (DXY) is down 12 cts this morning at $93.58 – bringing it back to July 2018 levels. Gold is now a good 10% above its 50 dma trendline… a level that suggests a pullback is in order – but depending on what it hears from the FED today – will dictate the next move… in any event – I would not be chasing gold here – just fyi.

The SPX closed at 3218… We remain in the 3200/3250 range for now… and will only break out after we hear from both the FED and the list of tech earnings later in the week. Remember – tech has led and will continue to lead, but it is a crowded trade – any sense that tech is under pressure will once again cause the trader types to hit the sell button – taking tech lower and then the market lower… but again – I think that is short lived. With the circus in town today – my sense is that the market will churn – and test the lows of Friday at 3200… before finding support… expect the buyers want to test the anxiety level of the sellers.

Joey Biden is seen and photographed with a scrap paper with Kamala’s name at the top – is this just a tease?  Is he trying to create even more speculation or is he trying to divert attention away from ‘the real pick’?  The big reveal happens next week… stay tuned.

This is a great dish – easy to make and a pleasure to serve.

You start by making the Tomato Bruschetta  – get some nice ripe plum tomatoes – maybe 7 or 8… dice and add to a glass bowl… 3 or 4 cloves of garlic… now crush two of them and then slice the other two – add to bowl… fresh basil – chopped, s&p, olive oil and diced red onion… (I love red onions so the more the merrier – but you figure it out…) Cover and let marinate… do not refrigerate…

Pour some olive oil in a broiling pan and turn broiler on high. You want enough so that you cover the bottom of the pan – but you do not want the cutlets bathing in oil… place the rack on the second level below the broiler.

Now the presentation… You need to make a bed of greens on the plate – maybe fresh spinach, or arugula, or Boston bib – you can mix or use just one… Next place the broiled cutlet on top in the middle – looks good no?

Serve with a red wine of your choosing… I like a Chianti Classico with dish – but you can choose whatever makes you happy.