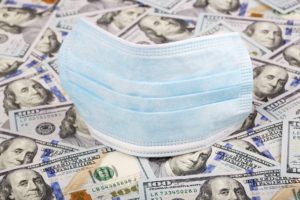 “What a difference a day made, Twenty-four little hours, Brought the sun and the flowers, where there used to be rain…” Dinah Washington – 1959

It rained a lot on Monday and Tuesday – with the markets losing nearly 6% as the selling turned into a frenzy. Oil IMPLODED sending investors scrambling, leaving the USO ETF in tatters and leaving the oil industry a shadow of its former self! 50 announced bankruptcies (so far) in the energy space will create a lot of work for lawyers from NY to Texas for years to come. It has also created a generational opportunity for Distressed Bond Funds and managers that have the expertise to understand the space and invest appropriately. For you younger guys – get ready – you’re about to be educated.

So after the rout on Monday and Tuesday – many were left asking:

Stocks did what yesterday? Oh, yes they bounced by 2%. And Oil did what? Oh, yes – it EXPLODED higher, surging nearly 40% at one point before settling and closing at +23%. Gold rallied 3%, Treasuries fell slightly sending yields up slightly, the Dollar Index – DXY continues to trade just above par. Earnings continue to come in as expected (weak) and forward guidance is hard to come by. Congress is about to add another $300 billion to the PPP program, The North Koreans launch missiles towards Japan, (all while Chubby – Kim Jung On remains in hiding). The Iranians taunt US ships in the Gulf and Donny (via Twitter) tells us that he has ordered the navy to “destroy any Iranian gun boats that harass our ships at sea.” The US is working on a plan to re-start the economy that is being met with all kinds of resistance along party lines (which makes zero sense). NY’s Andy Cuomo reports that cases in NY are falling, intubations are down, emergency rooms are no longer as chaotic as they have been and that the worst of it appears to be over. My what a difference a day makes. Stocks closed up with the Dow adding 456 pts or 2%, the S&P added 63 pts or 2.3%, the Nasdaq (was the outperformer) rising 232 pts or 2.8% and the Russell tacked on 16 pts or 1.4%.

The gains were broad – leaving all sectors higher than they were on Tuesday. Technology (no surprise) led the way, with energy crawling right up it backside – after the slaughtering it took earlier in the week.  Look – the virus is an issue, no doubt, but oil and energy have been the real elephants in the room that no one wanted to discuss until it raised its ugly head and created a nightmare for so many. It careened out of control and went negative for the current month while dragging forward months lower as this oil story continues to build.

The USO – one of many energy ETFs has gotten slaughtered as the oil markets came unglued – resulting in numerous halts in trading and “on the fly” changes to its mandate. That would suggest something else is wrong and could other ETFs manage to “change their mandates” if they don’t react the way they were supposed to? Which brings up a whole other conversation about how ETFs are “supposed to act” versus “how the do act” when reality hits and it is no longer a “test environment.” We should have that conversation- because it is important – since we all play in the same arena and if we begin to see ETFs implode then the passive investing game that has transformed the industry will and should come under scrutiny. Period.

Look – investors remain confused – one day it appears its settling down, then the next day it isn’t. Markets continue to heave creating volatility as we witness larger than normal price swings that continue to cause heartburn on an hourly basis. On top of this is the fact that we are now waist deep into earnings season and investors continue to look for guidance and insight into how the pandemic has affected US businesses. And while it is ugly (for some), there is a silver lining for others. Tanker stocks are surging higher as they are in full demand as a place to store cheap oil. (EURN, STNG, DHT, NAT) are all making or approaching new highs as the broader market is off more than 18%, social media stocks (FB, SNAP, TWTR, NFLX), restaurant stocks (CMG, MCD, YUM, WEN, LOCO), technology names (FANG STOCKS), entertainment names (DIS, FOXA, DISCA), infrastructure software (ZM, VMW, CTXS, TWLO) all finding support in these turbulent times reminding us all that in crisis there is opportunity.

US futures are down after being all over the place overnight. Currently the Dow is -45 pts, the S&P is -2, the Nasdaq is -12 pts and the Russell is up 1 pt. Today is Thursday and we are about to get hit with a slew of economic data The leading role being played by Initial Jobless Claims – expectations of another week of losses only hammers home the reality of what is going on. This number is expected to be another 4.5 million people out of work – wiping out every last bit of the gains seen since the GFC.  Continuing Claims are expected to surge to more than 16 million people. Markit US Manufacturing PMI is expected to be 35 while Markit US Services PMI is expected to be 30. Both of those numbers well into contraction mode – as the US economy remains shuttered. New Home Sales are expected to fall by 15.8% and manufacturing activity in Kansas City is expected to be -37 pts.

The S&P closed at 2799 and is once again approaching its downtrending 50 DMA trendline at 2830. Now it was here at the trendline that we found resistance on Monday. So the question is: will that happen again? Will we rally up to, kiss it and then fail to pierce it? Well – that depends on what happens to oil today, what happens with the virus, what happens to the macro data and earnings and how street analysts and strategists define it. If we break through this level, then expect a test of the most recent high of 2850 – which coincidentally was where the trendline was when it failed on Monday. Short term support remains at 2650 – or 4% from here, a level I absolutely think we will test in the days ahead. Remember – talk to your advisor – get comfortable with the design of your portfolio – build a defensive portfolio as the days and months ahead remain fairly uncertain which doesn’t mean that it will be a disaster. It just means make sure you’re comfortable.

European stocks are waffling around – beginning the day a bit weaker on disappointing economic data.  Eurozone business activity falls to a record low. IHS Markit PMI plunges to 13.5 down from 29.7 last month. Remember 50 is the dividing line. Anything below 50 suggests weakness but a number as low as 13.5 suggest more than just “weakness.” Individual countries – France and Germany were the biggest contributors to the weakness – falling to 11.2 and 17.1 respectively.

Oil is up another 14% or $2 at $15.82 – some of this driven by rising tensions (Iranians), more calls for production cuts by a range of producers, and stimulus measures around the world that promise to restore the global economy which will stimulate demand all contributing to the move yesterday and this morning. Forward contracts, looking out 3 or 4 months, are trading closer to $30/barrel as the expectation is for a return to more “normal” than not. The market remains volatile and will continue to until we get more clarity on re-opening the economy. 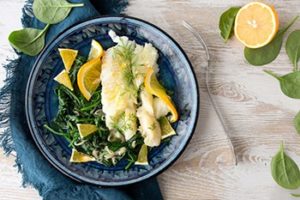 Halibut is a great fish to cook with. It is a white fish, flaky and takes to any number of dressings. Today –we are going to sear it in a little butter/oil and then roast in the oven until tender. When serving – you drizzle some homemade Orange/Lemon Butter. Sound good?

For this you need:

For the sauce you need:

Begin by adding the juice from the lemon and orange to a sauce pan and reduce by half over med heat – set aside.

Preheat the oven to 400 degrees

Season the halibut with s&p.

In a sauté pan – heat up a dollop of butter and a splash of olive oil – when sizzling – add the halibut and sear nicely until golden brown on both sides. Remove and set in a roasting pan and place in the oven for 15 mins (or so).

While this is cooking… find another sauce pan… add in a half a stick of butter – when melted – add the sliced shallots and sauté. Now add about three quarters of a cup of white wine and cook until reduced by half. Turn the heat to simmer… add a tbsp. on butter and whisk – when incorporated, add another tbsp. of butter and repeat – continue for 2 more tbsps. Now slowly add in the citrus juice and mix well.

This looks great on a bed of spinach. Place the halibut on top and then spoon the sauce over the top.  Serve with your favorite white wine.