Enormous! That is the way to describe what happened on Tuesday while CONFUSION is what happened on Wednesday. Now, yes – stocks did go higher yesterday – making it two days in a row that the Dow advanced (cause for celebration) but ended the day well off their highs. The algos became confused. Because the deal that was on the table – yesterday morning was still on the table yesterday afternoon. As the day wore on – the Dow had a 1480 pt swing from high to low – investors kept trying to make sense of the headlines. Was there a deal or not? And as the afternoon wore on – the Dow which was up more than 1000 pts gave half of that back in the final 15 mins of trade. Presidential candidate Bernie Sanders now at the center of the fight – holding up this massive rescue package in what is being called a “snag.” [SNAG – an unexpected or hidden obstacle].

Concern now over whether a rescue package was going to happen now at the top of the list. Would we in fact get a deal or not and would it be what it was projected to be? Talk of what this huge package would look like started to take on various explanations as the virus continues to wreak havoc on the US and global economy. That raised the level of concern – so the algos went into reverse as talk of today’s economic data sent shivers through the system.

Today at 8:30 am – we will get Initial Jobless Claims – a number that has been in the 215K range for a long time now – as unemployment remained at historic lows. But that is all about to change, as the impact from “Rona” continues to take center stage. The survey is suggesting that today’s number will surge to 1,500,000 new claims – but the whisper number suggests that we could see twice that this week alone. Citibank is way out on the curve projecting a record shattering number of 4 million new claims. Look – CA Governor Gavin Newsome has already told us that they have seen 1 million new claims already and that is just one state. Today’s report will include 49 other states data as well. So get prepared.

The lingering angst over how much longer this will go on as well as what it is about to do to the economy is keeping the markets on edge. The growing pandemic leaving the global economy in a mess companies shuttering plants and businesses closing their doors as the virus takes hold and to add insult to injury. We have governments around the world manufacturing an economic crisis as they enforce “shelter in place” rules to try and slow the spread of this virus. It is all very complicated. At 8 pm last night word that the Senate voted and passed the bill was seen as a positive – but all this means is that it went back to the House for a final vote there. House majority leader – Steny Hoyer (D: MD) told us that the House would “consider the bill” on Friday. So sit tight – because I am sure there is more to come.

Overnight markets around the world reacting to the latest developments out of Capitol Hill along with anticipation of what Initial Jobless Claims are going to look like. Because as bad as this week’s number is going to be, next week’s will be even worse and the following week’s – worse again. Data from around the world is starting to confirm massive economic contractions – and while this is not unexpected, it is becoming reality. We have been preparing for bad prints to the tape but I’m just not sure the market has fully priced it all in yet. Today’s report is about to kick off the new reality in the states while data out of the rest of the world is going to kick off the new reality across the globe.

European markets are under pressure as investors there brace for US eco data at 8:30. The EU (European Union) is holding a “virtual summit” as they attempt to come up with a more coordinated response to this crisis as Italy and Spain continue to lead Europe in infections and deaths. There is no economic data out of Europe today so the focus remains on the continuing drama of the crisis and the economic impact it is about to create. Markets remain volatile.

US futures are off in early trading after having been up most of the night as we brace for a shocker of a number this morning. Remember – today’s number is just the first of what are going to be a slew of bad numbers – so get ready for numbers we have not seen in a while. Whether or not the recession IS here – it is certainly coming and the only thing we can hope for is that the recovery will be swift once the world comes back online. At 7 am the Dow is down 98 pts, the S&P is down 23 pts, the Nasdaq is down by 57 pts and the Russell is off by 11 pts.

Next up – is the fact that the “deal” is now on its way to the House. That vote not happening until Friday. So this is all still very tenuous, and again while I am not suggesting that it will fail. It is NOT done yet. Any hint of stalling would surely see the algos go from BUY mode to SELL mode and you know what that means.

The S&P closed at 2475 and appears to be trying to build a base in the 2200/2500 range. This is preliminary – it could get worse, as we move thru the next couple of weeks. But – if it steadies here – that would be a good sign. Yesterday’s Senate action is an important next move. And the House action tomorrow should help to bring clarity to that rescue package. Do not expect it to be the cure all – as someone will always feel like they didn’t get what they need. But it is a step in the right direction. A failure at passage will see the market tumble again while a passage is still sure to bring a lot of questions over implementation. Either way – do not be surprised to see the market continue to thrash around as it digests the daily headlines. We are seeing a spike in US cases now but don’t expect the spike to peak for at least another two weeks so what we can expect is continued volatility. 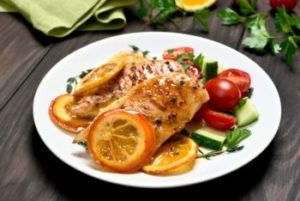 For the sauce you will need: 4 tbsp. butter, 1 shallot, 2 tbsp. of brandy, 1 cup of fresh squeezed orange juice, 3/4 cup of chicken broth, 1 navel orange cut into segments – and then cut the segments into thirds, Italian Parsley, s&p.

First combine the orange juice, zest, 4 cups of water, and about 3 tbsp. of salt in a bowl and stir to dissolve the salt… when ready add the chicken breasts and refrigerate for a couple of hours.

In a large “oven proof” sauté pan – heat up some olive oil over med hi heat – add chicken – skin side down and cook until the skin is golden brown – about 5 mins. Turn the chicken over and season with s&p. Place in oven and roast for 15 mins… (do not throw out the juice from the chicken – pour into a measuring cup and let cool so the fat comes to the top)

Remove the chicken and put on a plate and cover with tin foil.

Now for the sauce – use the juice from the chicken –  skim the fat – once it rises to the top.

Melt 2 tbsp. of butter over med hi heat – add the chopped shallot and cook until soft.  Remove from heat and add brandy – then return to stove and scrape the bottom of pan – brandy will evaporate.

Now add the orange juice… boil it until it turns thick and syrupy about 4 or 5 mins… Add chicken broth and the pan juices and cook for about 3 mins. Remove from the heat and add the orange slices, parsley and 2 tbsp. butter and stir until the butter melts… season with s&p.

When serving – cut the chicken in slices and place in a fan like presentation then top with the orange Brandy sauce.